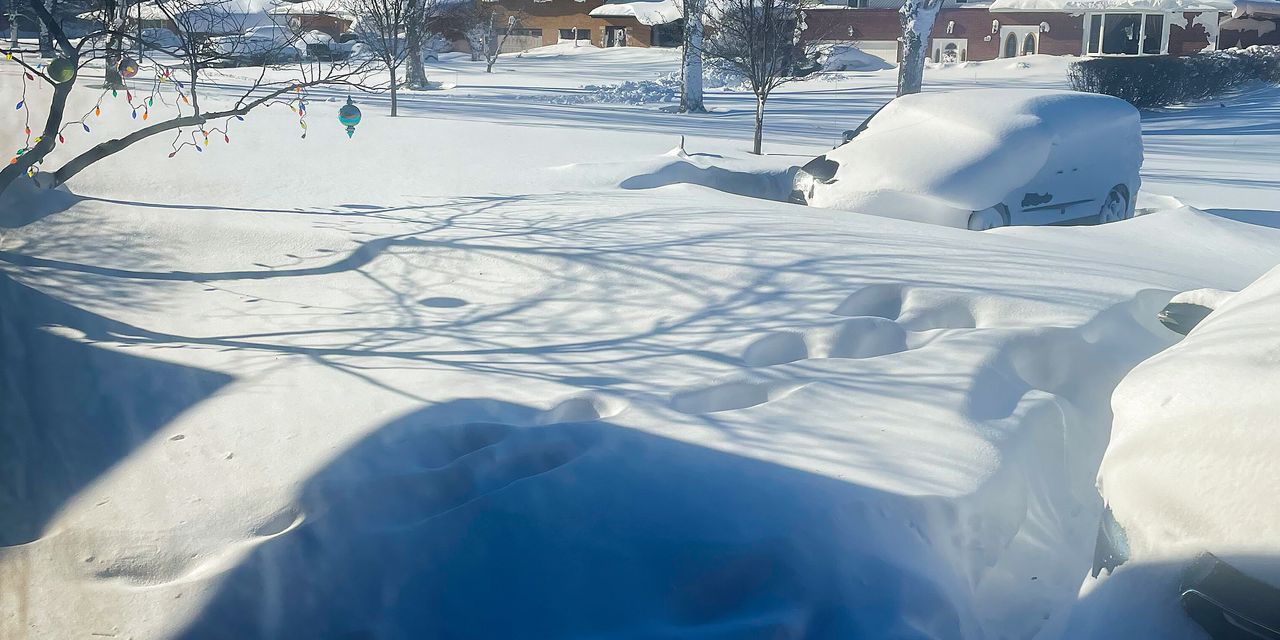 BUFFALO, N.Y. (AP) —  The death toll from a pre-Christmas blizzard that paralyzed the Buffalo area and much of the country has risen to 27 in western New York, authorities said Monday, as the region dug out from one of the worst weather-related disasters in its history.

The dead have been found in cars, in their homes and in snowbanks. Some died while shoveling. The storm that walloped much of the country is now blamed for at least 48 deaths nationwide, with rescue and recovery efforts continuing Monday.

Living With Climate Change: Climate change and the polar vortex: Winter storms are normal, but this string of severe Christmas weather isn’t typical

The blizzard roared through the western New York state on Friday and Saturday, stranding motorists, knocking out power and preventing emergency crews from reaching residents in frigid homes and idled vehicles.

Huge snowdrifts nearly covered cars Monday, and there were thousands of houses, some adorned in unlit holiday displays, darkened by lack of power.

The massive storm is expected to claim more lives because it trapped some residents inside houses and knocked out power to tens of thousands of homes and businesses.

Extreme weather stretched from the Great Lakes near Canada to the Rio Grande along the border with Mexico. About 60% of the U.S. population faced some sort of winter weather advisory or warning, and temperatures plummeted dramatically below normal from east of the Rocky Mountains to the Appalachians.

The National Weather Service said Sunday that the frigid arctic air “enveloping much of the eastern half of the U.S.” would move away slowly.

New York Gov. Kathy Hochul, a Buffalo native, said almost every fire truck in the city was stranded Saturday and implored people Sunday to respect an ongoing driving ban in the region. The National Weather Service said the snow total at the Buffalo Niagara International Airport stood at 43 inches (1.1 meters) at 7 a.m. Sunday. Officials said the airport would be shut through Tuesday morning.

With snow swirling down impassable streets, forecasters warned an additional 1 to 2 feet (30 to 60 centimeters) of snow was possible in some areas through early Monday morning amid wind gusts of 40 mph (64 kph). Police said Sunday evening that there were two “isolated” instances of looting during the storm.

Two people died in their suburban Cheektowaga, N.Y., homes Friday when emergency crews could not reach them in time to treat medical conditions. Erie County Executive Mark Poloncarz said 10 more people died there during the storm, including six in Buffalo, and warned there may be more dead.

“Some were found in cars. Some were found on the street in snowbanks,” Poloncarz said. “We know there are people who have been stuck in cars for more than two days.”

The Margin: Why you should always keep cat litter in your car — and other winter storm tips

Freezing conditions and power outages had Buffalonians scrambling to get to anywhere with heat amid what Hochul described as the longest sustained blizzard conditions ever in the city.

Ditjak Ilunga of Gaithersburg, Md., was on his way to visit relatives in Hamilton, Ontario, for Christmas with his daughters Friday when their SUV was trapped in Buffalo. Unable to get help, they spent hours with the engine running, buffeted by wind and nearly buried in snow.

By 4 a.m. Saturday, their fuel nearly gone, Ilunga made a desperate choice to risk the howling storm to reach a nearby shelter. He carried 6-year-old Destiny on his back while 16-year-old Cindy clutched their Pomeranian puppy, following his footprints through drifts.

“If I stay in this car I’m going to die here with my kids,” Ilunga recalled thinking. He cried when the family walked through the shelter’s doors. “It’s something I will never forget in my life.”

Travelers’ weather woes continued, with hundreds of flight cancellations already and more expected after a bomb cyclone — when atmospheric pressure drops very quickly in a strong storm — developed near the Great Lakes, stirring up blizzard conditions, including heavy winds and snow.

The storm knocked out power in communities from Maine to Seattle. But heat and lights were steadily being restored across the U.S. According to the website poweroutage.us, fewer than 200,000 customers were without power Sunday at 3 p.m. Eastern time — down from a maximum of 1.7 million.

The Margin: Five tips for staying safe and warm during a power outage

The mid-Atlantic grid operator had called for its 65 million consumers to conserve energy amid the freeze Saturday.

Storm-related deaths were reported all over the country, from six motorists killed in crashes in Missouri, Kansas and Kentucky to a woman who fell through Wisconsin river ice.

In Jackson, Miss., city officials on Christmas Day announced residents must now boil their drinking water due to water lines bursting in the frigid temperatures.

Economic Report: The cost of health care is surging again and adding to high...

Want to buy the newly issued Porsche stock in the U.S.? It’s complicated.

SVB Leerink: AstraZeneca’s Lynparza could bring in $9.7 billion in sales...