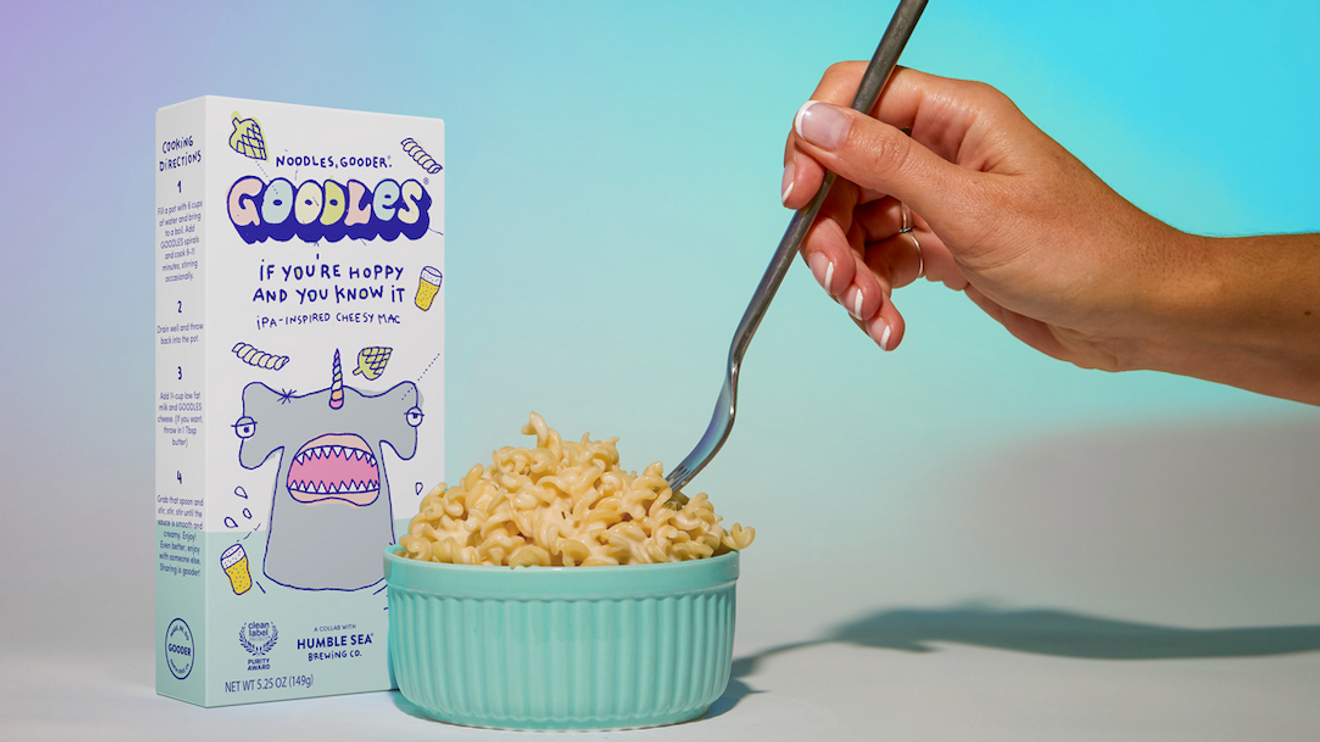 Yes, your macaroni and cheese just got boozy.

Technically speaking, there’s no alcohol in this soon-to-be-released product from Goodles, a new mac ’n’ cheese brand that aims to bring a better-for-you and somewhat grown-up sensibility to the beloved child-oriented product category. But it is designed to taste like beer — specifically, an IPA, the style of hoppy brew that remains a dominant force in craft brewing. (IPAs account for about 40% of the craft-beer market.)

Goodles had already been introducing unique flavor profiles for its boxed mac ’n’ cheese offerings before it came up with this product, which will be launched in the coming weeks (alas, not in time for National IPA Day, which is Aug. 4). Among the items it offers: a mac ’n’ cheese inspired by cacio e pepe, a classic Italian pasta dish, and a shells ’n’ cheese made with aged white cheddar.

Still, the thought occurred that there was more to be discovered. Goodles co-founder Paul Earle said he and his team realized that mac ’n’ cheese pairs well with beer, so why not make a mac ’n’ cheese that’s all about the beer?

The product that emerged uses hops, lemon and extracts of IPA malt to get that proper beery flavor — and all those ingredients are blended with white farmhouse cheddar. As with other boxed versions of mac ’n’ cheese, the pasta has to be cooked and the flavored cheese is in the form of a powder that’s added at the end.

Earle said Goodles may not be done when it comes to boozy mac ’n’ cheese. He won’t give any details, but I wouldn’t be surprised to see a bourbon-flavored variety in the future.

I decry lots of gimmicky food and drink items, such as a Velveeta-flavored martini. But I will say this mac ’n’ cheese is tasty stuff (I got a sneak peek — er, bite — ahead of the launch.) The IPA flavoring is subtle — more like a hint of hops than a full-blown mouthful of bitterness. But that works with the cheddar and delivers a pleasing, adult-style version of the dish. Just don’t expect to get a beer buzz from it.

When you’ve got a beer-flavored mac ’n’ cheese, it’s logical to pair it with, well, a beer. Earle said most any IPA will work.

Tom Brady exited football with a $475 million fortune. Here’s how...