Home Top Stories : Unionized workers have more job satisfaction — but for a sobering... 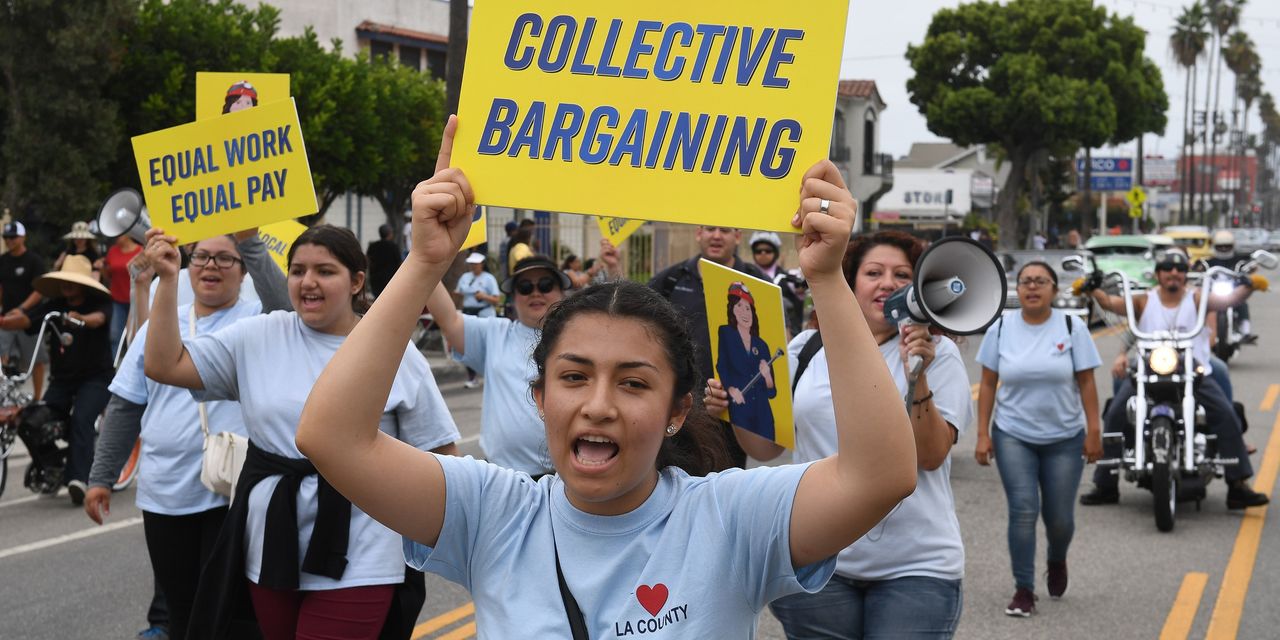 At a time when organized labor is coping with a high-profile vote against unionization at an Amazon fulfillment center, union leaders in search of selling points about joining their ranks received one.

Unionized workers tend to say they are more satisfied with their job compared to their non-unionized counterparts, according to a new study from researchers at the University of Wisconsin College of Business, Dartmouth College and University College London.

Or, more precisely, union workers are “less unhappy” than non-unionized counterparts who are “being pushed in a job that doesn’t have enough hours,” said David Blanchflower, a Dartmouth College professor who is one of the authors.

Blanchflower and his colleagues wrote that unions have an “ability to minimize covered workers’ exposure to underemployment, a phenomenon that has been particularly detrimental to the wellbeing of non-union workers.”

The findings provide an interesting twist in a decades-long story on slipping union membership. 10.8% of the workforce belonged to a union last year, according to the Bureau of Labor Statistics. That’s down from a 20.1% membership rate in 1983, the first comparable year.

But the 2020 membership rate is actually up 0.5% compared to 2019, according to the agency. That’s because 2020’s pandemic-related job losses, as a whole, disproportionately outpaced union-member job losses, the Bureau of Labor Statistics explained.

For Blanchflower, those rates are a reaffirmation of why there’s a link now between union membership and job satisfaction. “I think it’s about that fearful alternative,” said Blanchflower, who’s studied the links between economics and happiness for years.

The positive link between job satisfaction and union affiliation is actually a relatively new trend that’s been dawning since the Great Recession, said the study, which was distributed by the National Bureau of Economic Research.

It used to be that there was a negative association between union affiliation and job satisfaction, a phenomenon first chronicled in studies in the late 1970s.

Union workers tended to earn more and not to quit — potentially because other job prospects with less pay seemed less appealing, Blanchflower said. They also had job protections that allowed them to voice concerns. All that, put together, painted the picture of less satisfied union workers.

But then the Great Recession came along, coupled with the rise of the gig economy that offered pay and “side hustles” but not benefits or full-time wages.
The underemployment that came along with it helped shifted the ground on job satisfaction, Blanchflower said.

(Though union jobs tended to pay better rates, the researchers wrote that gap varied from 2000 to 2019 without a detectable pattern, “suggesting change in the union wage premium is unlikely to explain rising job satisfaction among union relative to non-union workers.”)

Bureau of Labor Statistics numbers show there was a 10.7% underemployment rate in March 2021. That’s down from 22.9% in April 2020, just as the pandemic began to hit the country.

As the job market came out from under the Great Recession, the underemployment rate stayed around 16% for most of 2011, the Bureau of Labor Statistics numbers show.

The new research comes less than a month after workers at an Amazon AMZN, fulfillment center in Bessemer Alabama voted against unionizing.

But if unions bring more job satisfaction, what happened in Bessemer? The workers may very well have been worried about holding onto their jobs, Blanchflower said.

Some observers said the Bessemer ‘no’ vote shows unions’ waning appeal, but others say the vote showed the weakness of current labor laws that enable employers to “bombard” workers with messages that could cause them to worry about their job if a union comes together.

The Retail, Wholesale and Department Store Union filed an appeal with the National Labor Relations Board, saying Amazon interfered with the right of workers to have a free and fair election. Amazon has denied intimidating any workers.

The Moneyist: ‘This guy grifted me hard’: My date chose an exclusive L.A. restaurant. After dinner, he accepted my credit card — and we...

Help My Career: ‘Gaslighters have two signature moves’: Are you being gaslighted at work? Here’s how to recognize the signs.

Novavax shares plummet in premarket after halving of revenue guidance

The Fed: Here’s where Fed voters stand on raising interest rates and reducing $8.8...

Market Extra: What an inverted yield curve says about the stock...