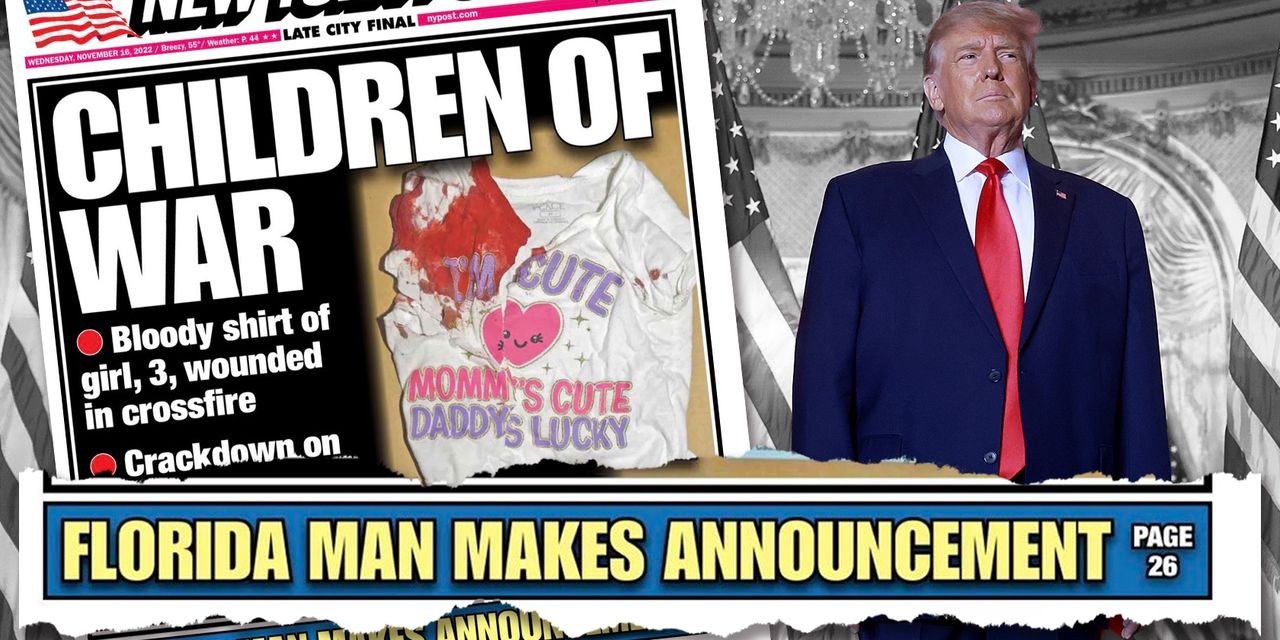 What a difference two years makes in the tabloid wars.

The New York Post endorsed Donald J. Trump for president in 2020 (after abstaining from endorsing any presidential candidate in 2016), and splashed Trump across its front page at the time, calling on him to “Make American great again, again.”

But after Trump launched his third consecutive presidential bid in Palm Beach, Fla., on Tuesday night, the Post not only buried its piece on the announcement on Page 26 come Wednesday morning — but it also relegated the news item to a simple banner running along the bottom of the front page that read, “Florida man makes announcement.” It chose to devote most of its front page to reporting on gang violence in New York City, instead.

It didn’t get much better for the former president inside. The anonymous staff report, running just a few column inches long, led with the headline “Been there, Don that.” And it described Trump as “a Florida retiree” and “avid golfer” with a “classified documents library” at his Mar-a-Lago home and membership club.

It also described Trump as famous for “gold-plated lobbies and for firing people on reality television,” and said that his qualifications for office included “being a ‘stable genius.’ ”

Meanwhile the Post’s tabloid archrival, the New York Daily News, allocated most of its front page to Trump on Wednesday, along with a headline reading, “Here we go again.” The Daily News, which endorsed Hillary Clinton in 2016 and Joe Biden in 2020, also featured thumbnails of some of its previous covers that captured Trump’s political rise and fall, along with his legal troubles, over the past several years.

The Post’s about-face on Trump drew plenty of attention on Twitter on Wednesday morning, leading “Florida man makes announcement” and “Page 26” to trend throughout the morning. Some people took this as a sign that Trump was “toast” — or used even stronger language.

Trump’s big announcement drew mixed reactions from Republicans and conservatives, as well. While supporters such as Arizona Republican candidate for governor Kari Lake and Republican Rep. Marjorie Taylor Greene from Georgia promptly tweeted their support, other notable Republicans including Liz Cheney and Mitt Romney spoke out against a second Trump term in the days leading up to the announcement. Party leaders such as Mitch McConnell, Kevin McCarthy and Ronna McDaniel were quiet Tuesday night. And Trump’s daughter, Ivanka Trump, skipped the Mar-a-Lago fête, and released a statement saying, “I do not plan to be involved in politics” this time around.

U.S. oil futures finish lower, but hold above $80 a barrel

FA Center: This 50-year-old Vanguard mutual fund is holding its own...