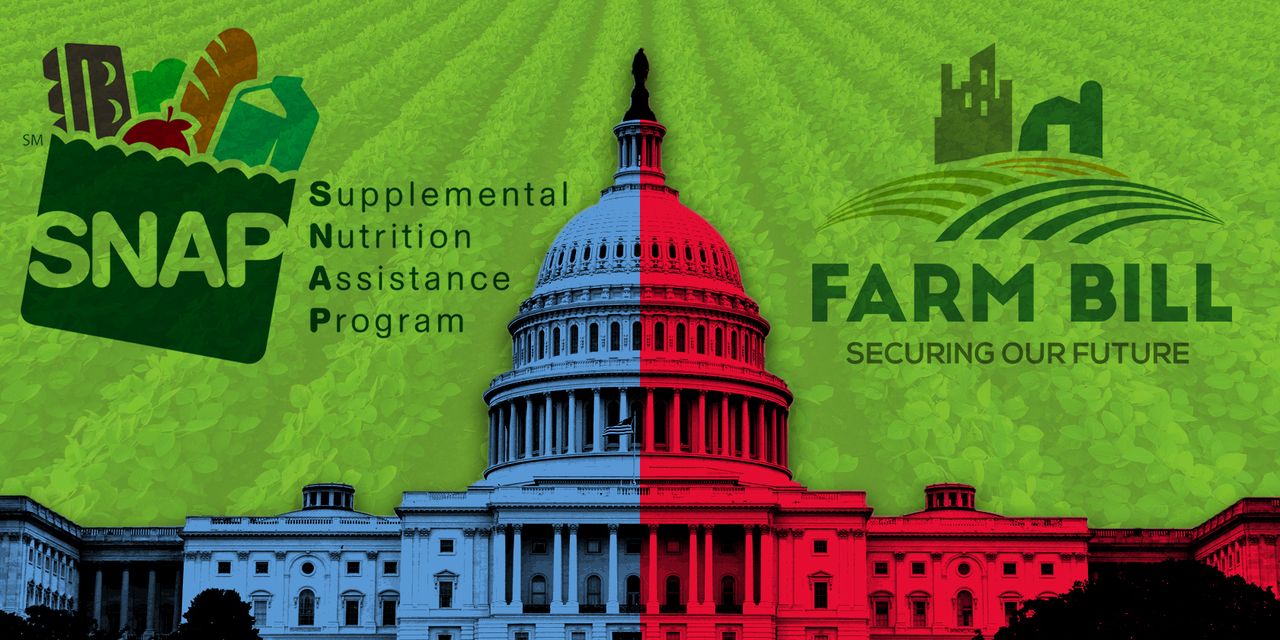 The midterm election results will have far-reaching effects, including on low-income Americans. But it’s a particular piece of annual spending legislation that may determine food security during a time households already feel the pinch.

The scope of the reauthorization and how much money will be appropriated for the farm bill, as it’s commonly known, in 2023 may depend on the results of Tuesday’s elections, said Elaine Waxman, senior fellow at the Urban Institute’s Income Benefits Policy Center, a left-leaning think tank.

The farm bill essentially decides how the government will spend money on food — from agricultural production and international trade to food security and aid for lower-income families. Every five years, the House and Senate revisit the budget makeup and requirements of the bill, and eventually reauthorize the bill. Each year in between, new appropriations must be approved. The current version of the farm bill, the Agriculture Improvement Act of 2018, expires in September 2023.

The largest budget in the farm bill is allocated to nutrition programs, in particular the Supplemental Nutrition Assistance Program (SNAP). Formerly known as the food stamp program, SNAP aims to help lower-income households afford to eat.

But the robustness of the reworked bill, which has expanded regularly especially since the 1970s, is hard to determine. Both the Senate and House of Representatives are too close to call. As of Wednesday, Republicans appear to have gained ground in their push to regain control of the House. The Senate will hinge on a few key races yet to be finalized. A divided Congress would result in more wrangling and compromise over how funds in the Farm Bill are allocated, analysts say.

“As of Wednesday afternoon, the Senate and House of Representatives are too close to call. A divided Congress would result in more wrangling over how funds in the farm bill are allocated. ”

“SNAP helps more than 41 million people — roughly the equivalent of the population of New York State, Georgia and Michigan combined — put food on their table every month,” said Alice Reznickova, interdisciplinary scientist at the Union of Concerned Scientists, a nonprofit organization based in Cambridge, Mass.

“SNAP supports millions of American families, often adult caretakers with children or seniors, and plays an important role in both urban and rural economies,” she wrote in a blog post this week.

During the pandemic, Congress increased SNAP benefits and paused the work requirements for able-bodied people. The program used to require most able-bodied people to work at least 20 hours a week, or else participants would only be able to get three months’ aid over a total of 36 months.

Now that the unemployment rate has fallen from the peak of the pandemic — it hovers at 3.7% in October, down from a recent high of 14.7% in April 2020 — talk among lawmakers about ditching these emergency measures has been increasing, especially from some Republicans.

“Republicans have called for states to administer their own SNAP programs based on the unemployment and poverty rates, in addition to the length of time beneficiaries have received such aid.”

The Republican Study Committee outlined its vision for the farm bill in a recent report. “The SNAP law is supposed to limit benefits for able-bodied adults without children who are unwilling to work, search for work, or enroll in job training for three months in any three-year period,” according to the report.

“Further, for many years, conservatives have pushed for SNAP to be converted into a discretionary block grant to the states based on rates of unemployment, poverty and the length of time beneficiaries receive aid,” it added. “Under this model, states would have flexibility to administer their own programs subject to several commonsense requirements to ensure program effectiveness and viability.”

But Democratic opponents said SNAP eligibility must take into account the real-life challenges of unemployed and/or underemployed workers.

“Those subject to this rule have extremely low incomes and often face barriers to work,” said Ty Jones Cox, vice president of food assistance policy at the Center on Budget and Policy Priorities (CBPP), a progressive think tank in Washington, D.C., focusing on the impact of federal and state government budget policies.

Those barriers include criminal justice history, racial discrimination and/or health impairments, while unemployed and underemployed Americans also tend to have less education, she added. Jones Cox was speaking before the House Agriculture’s Subcommittee on Nutrition, Oversight, and Department Operations in June.

The balance of power in Congress

The push to cut the SNAP budget is long in the tooth. In 2014 and 2018, House Republicans proposed large cuts for both years’ versions. Neither made it to the final version. Republicans had a House majority in 2014, while Democrats held the majority of the House in 2018.

Whether the Republicans take control of both the House and Senate, or the midterm leaves the country a divided Congress, Republicans will most likely seek to shrink the size of the supplemental nutrition programs, which include the Special Supplemental Nutrition Program for Women, Infants (WIC) and SNAP, analysts say.

If the Democrats manage to hold onto both the Senate and the House, the Biden administration will have more leverage within the farm bill to continue its focus on reducing hunger, underpinning nutritional programs, and supporting climate-change mitigation and adaptation help, as well as conservation programs, for farmers and ranchers. Those efforts are likely to expand opportunities for small producers, the report says.

Cuts in the SNAP budget, on the other hand, could impact millions of Americans. For fiscal year 2022, more than 41 million people — or nearly 22 million households — received food stamps totaling close to $96 billion, according to the latest data from the Department of Agriculture.

During the worst days of the pandemic, SNAP enrollment surged: In 2020, around 3 million more Americans enrolled in SNAP, pushing the individuals participating in the program to 39.8 million from 35.7 million.

“People think when the unemployment rate goes down, then SNAP becomes less important,” Waxman said. But the lingering effects of the pandemic, 40-year high inflation and rising interest rates have only complicated that simple assumption, she added.

Food inflation has no quick fixes

Inflation stood at 8.2% in September compared to a year ago, according to the latest government data. The rise in food prices was even higher at 11.2%. Everything is getting more expensive — from the costs of containers and labor to livestock feed — and those costs are passed through to consumers.

Russia’s war in Ukraine sent energy prices NG00, +2.76% soaring, and essential agricultural supplies were cut off by Western governments’ sanctions in response to the war. In addition, the pandemic disrupted global supply chains, and labor costs rose due to worker shortages. Extreme heat and weather in the past year further interrupted agricultural production.

“The cost of groceries has increased by 13% over the past 12 months, meaning that a $100 supermarket trip in September 2021 cost $113 in September 2022,” Reznickova pointed out in her blog post. “While $13 may not seem like all that much, it can have a large impact in a country where 13.5 million households struggled last year to put food on the table.”

“SNAP does not respond to fast-paced inflation like what we’ve seen this year,” she added.

Although inflation continues to be top of mind for voters, regardless of the results of the midterm elections, Congress can do very little to drag down food prices, Waxman said. There is no quick solution, she added.

“‘The farm bill, up for reauthorization in 2023, is our best chance to address the interlinked causes of food and nutrition insecurity because it touches every aspect of our food and farming system.’”

American households are dipping into their savings to pay their bills and cutting back on spending. Some families told MarketWatch that they cannot afford meat and, instead, were forced to turn to cheaper options such as beans.

Families with kids and lower-income households were most impacted by the rise in food prices. A mother of a household of five children living in Harrisburg, Pa., told MarketWatch that the family no longer has big sit-down dinners, as ingredients are now too expensive.

And a mom who works part-time as a parent-outreach director in Detroit told MarketWatch that, for the first time, her SNAP benefits were not enough to cover the cost of food for her and her son. In order to get by, she made partial payments to the utility bill.

The role of the Federal Reserve remains critical to controlling inflation with its series of interest-rate hikes, and elected officials should be careful not to undermine those efforts, said Mark Hamrick, senior economic analyst at personal-finance website Bankrate.

But putting food on the table remains a priority, he said. “If it was done properly, there would be an understanding that there might be a cost, but would be an acceptable cost,” Hamrick told MarketWatch, “because we’re talking about ultimately a humanitarian concern.”

For some, the solution — as far as one exists — remains clear. “The farm bill, up for reauthorization in 2023, is our best chance to address the interlinked causes of food and nutrition insecurity because it touches every aspect of our food and farming system,” Reznickova added.

“Reimagined, it can increase access to nutritious foods by increasing investments in nutrition and anti-hunger programs,” she said, “while also addressing the root causes of food and nutrition insecurity by promoting racial justice for farmers and farm workers and fair competition in the food industry.”

Market Extra: What a Russian invasion of Ukraine would mean for markets as Biden...

Microsoft stock dives to lead the Dow’s decliners, as it closes...

XPO Logistics expects $710 million in cash proceeds from sale of...