Home Top Stories : Starbucks investors push for review of how company is dealing with... 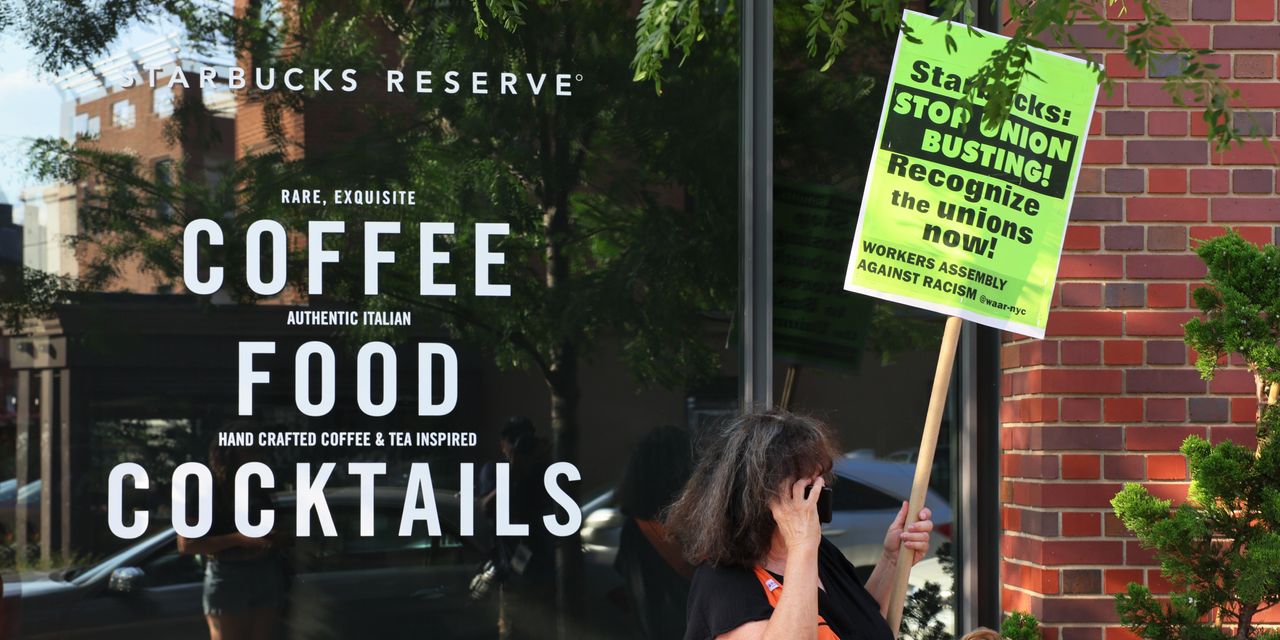 A coalition of Starbucks Corp. investors on Monday filed a shareholder proposal asking for a third-party assessment of the company’s stated commitment to workers’ freedom of association and collective bargaining rights, citing many allegations that the company has interfered with those rights.

The investors, led by the New York City Pension Funds, said in the proposal that there is an “apparent misalignment between Starbucks’ public commitments and its reported conduct.” For example, they said regional offices of the National Labor Relations Board have issued at least 20 complaints against Starbucks SBUX, +0.91% over hundreds of allegations of labor-rights violations that include captive-audience meetings, surveillance, retaliation, intimidation and firings, as well as excluding unionized employees from pay and benefit increases.

“When companies blatantly disregard and oppose their employees’ fundamental right to organize, they put their reputation on the line,” New York City Comptroller Brad Lander said in a news release. “For a company as focused on the customer experience as Starbucks, continued interference with worker organizing undermines the brand, which is essential to its success.”

Also mentioned in the proposal: Last month, Starbucks’ interim chief executive, Howard Schultz, was ordered to read a notice to employees telling them they had been illegally denied benefits and wage increases. Additionally last month, a judge ordered the company to reinstate seven Memphis, Tenn., employees it allegedly fired for their support of a union campaign.

Trillium ESG Global Equity Fund is a co-filer of the shareholder proposal. In March, Trillium Asset Management joined with Lander and a group of more than 75 shareholders to send a letter — their second — to Starbucks over the company’s handling of union activity. At the time, at least 120 stores had filed to vote to unionize. Now, more than 200 stores have voted to unionize, according to Starbucks Workers United.

At the time, a Starbucks spokeswoman denied allegations of union-busting. The company has consistently taken the position that it prefers to deal with its employees directly and not through a union, something that executives reiterated at the company’s investor day last week — where they also said they would boost benefits for workers as part of a broader plan to revamp their stores.

A Starbucks spokesman on Monday night said the company “routinely” engages with investors when proposals are submitted, and “we look forward to sharing the facts about our company and partners (employees) in those engagements.” He repeated the company’s position about preferring to work with employees “side-by-side than across a negotiating table.”

The proposal at the coffee chain follows a similar proposal earlier this month at Apple Inc. AAPL, +2.51%. As employees at its retail stores start to organize, the tech giant has also been accused of unfair labor practices, and the proposal for an independent assessment of its commitment to freedom of association and collective bargaining rights was also led by the New York City Pension Funds.

See: Is Apple committed to workers’ rights to organize? Investors want to know

Additional co-filers of the shareholder proposal at Starbucks were Pensions & Investment Research Consultants on behalf of pension fund clients, and Shareholder Association for Research and Education on behalf of the Catherine Donnelly Foundation. The investor group collectively owned more than $163 million worth of Starbucks stock as of June 30, according to its news release.

Also: Unions’ push at Amazon, Apple and Starbucks could be ‘most significant moment in the American labor movement’ in decades

: What the U.N. climate talks got right and wrong, according to a fund...

Bayer swings to a profit as sales rise and adjusts outlook