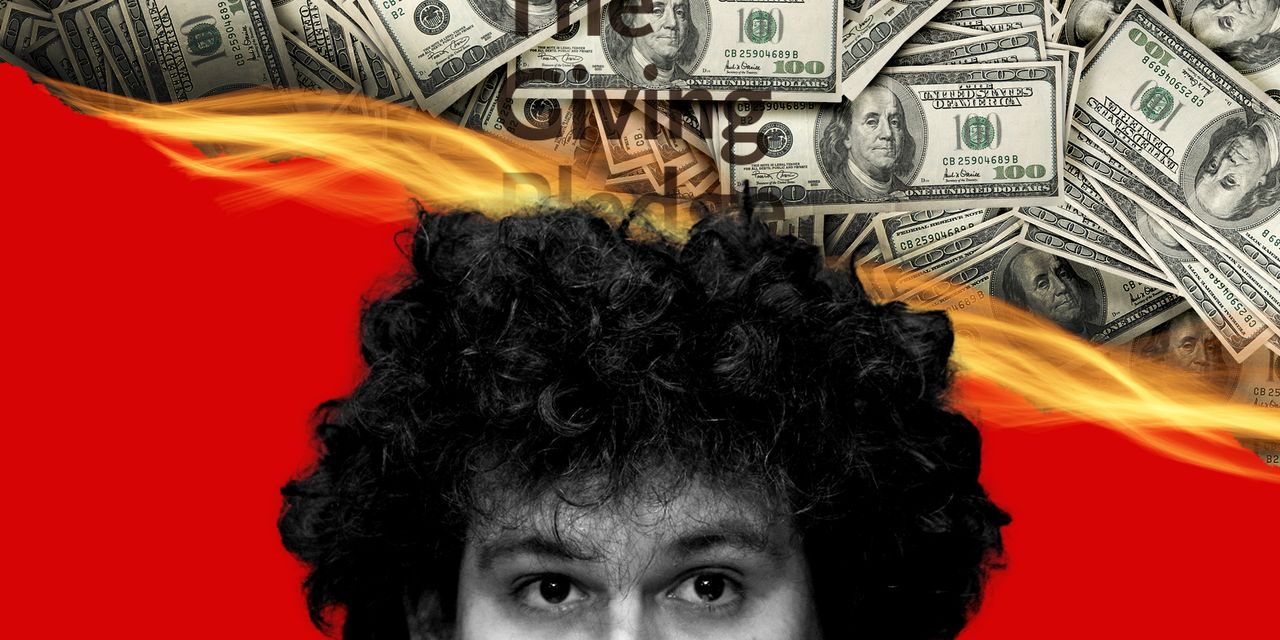 Sam Bankman-Fried once promised to give away most of his fortune to help humanity, but now some of the people who benefited from that generous pledge are wondering if they may have to give the money back.

After peaking at an estimated $26.5 billion, Bankman-Fried’s fortune appears to be evaporating with the collapse of FTX, the crypto exchange he founded and where most of his wealth was tied up. FTX has filed for Chapter 11 bankruptcy and is now under investigation by the U.S. Department of Justice and Securities and Exchange Commission after a run on the exchange zapped roughly $6.8 billion from user accounts.

The company said Friday that Bankman-Fried had resigned as CEO and would be replaced by John J. Ray III, a lawyer who worked on Enron’s bankruptcy.

One major piece of collateral damage in the debacle: the philanthropic entities that Bankman-Fried started to improve humanity’s chances for long-term survival, among other lofty goals. The senior staff of Bankman-Fried’s philanthropic FTX Future Fund publicly quit Thursday night, saying that the fund could no longer operate or process grants, and that they “have fundamental questions about the legitimacy and integrity of the business operations that were funding the FTX Foundation and the Future Fund.”

The group added, “We are devastated to say that it looks likely that there are many committed grants that the Future Fund will be unable to honor.”

The charitable operation’s abrupt end is a remarkable turn for Bankman-Fried, who has consistently promoted the idea that he and his company were both giving back to humanity as he rose to prominence in the crypto world. Bankman-Fried, now 30, has said he decided when he was 20 that he wanted to “earn to give,” meaning he would try to make as much money as possible so he could give it all away to charity.

He also said that he built giving into FTX’s business model, with 1% of all net fees reportedly donated to the “world’s most effective charities.” FTX users are also encouraged to donate to the FTX Foundation, and a leaderboard on the FTX website shows which ones have made the biggest contributions.

The FTX Foundation, which has been described as both a corporate philanthropy and a “philanthropic collective,” has reportedly given out some $190 million in donations. It’s funded mostly by Bankman-Fried and other senior FTX employees, according to its website. The foundation launched the FTX Future Fund this year, with plans of giving out between $100 million and $1 billion. That is also funded by Bankman-Fried, with “major contributions” from senior FTX staff and Caroline Ellison, the chief executive officer of Alameda Research, the crypto trading firm that reportedly owes $10 billion to FTX.

Some of the groups that received donations from the FTX-linked philanthropies are now wondering if they may have to return the money.

“Given it looks like FTX may have been involved in some pretty terrible business practices bordering on fraud (which makes me pretty ashamed to be associated with them), would it be possible that grants and [regrants] from FTX Future Fund could be clawed back in lawsuits and criminal proceedings?” one grantee wondered in an online forum.

To be sure, FTX and Bankman-Fried haven’t been accused of fraud. The Justice Department did not respond immediately to a request for comment on whether its investigation includes Bankman-Fried’s philanthropies.

There have been previous situations where donations to charities have been “clawed back” during legal proceedings. In 2011, charities had to return $200,000 in donations from Minnesota businessman Tom Petters after his company declared bankruptcy following his conviction in a $3.65 billion Ponzi scheme.

While heading the world’s third-largest crypto exchange, Bankman-Fried has also played a prominent role in the world of effective altruism, a method of charitable giving that emphasizes making data-driven decisions about how to deploy money most effectively for humanity’s betterment.

Bankman-Fried signed the Giving Pledge — a public promise to give away most of his wealth either in his lifetime or in his will — in June. “A while ago I became convinced that our duty was to do the most we could for the long run aggregate utility of the world,” Bankman-Fried wrote in his pledge letter.

The FTX website sounds a similar note, saying, “FTX was founded with the goal of donating to the world’s most effective charities. FTX, its affiliates, and its employees have donated over $190m to help save lives, prevent suffering, and ensure a brighter future.”

Read next: You need to understand the FTX debacle even if you have no investments in crypto

Project Syndicate: Will crypto survive? Sadly, the FTX debacle is unlikely to be the last

Blackstone may fetch $2 bln in sale of U.S. oil and gas producer PRI...

Coronavirus Update: Omicron strain of coronavirus that causes COVID now in at least a...

Investors in China-related assets who had expected a significant easing of COVID curbs were left disappointed this week as the country battles the worst...

5 reasons stocks have not put in a bottom yet and could post declines...

Qatar lost its second group game of the World Cup on Friday with a 3-1 defeat to Senegal in Doha. The tiny Persian Gulf...

Next Avenue: Here’s how to budget for home repairs so you...