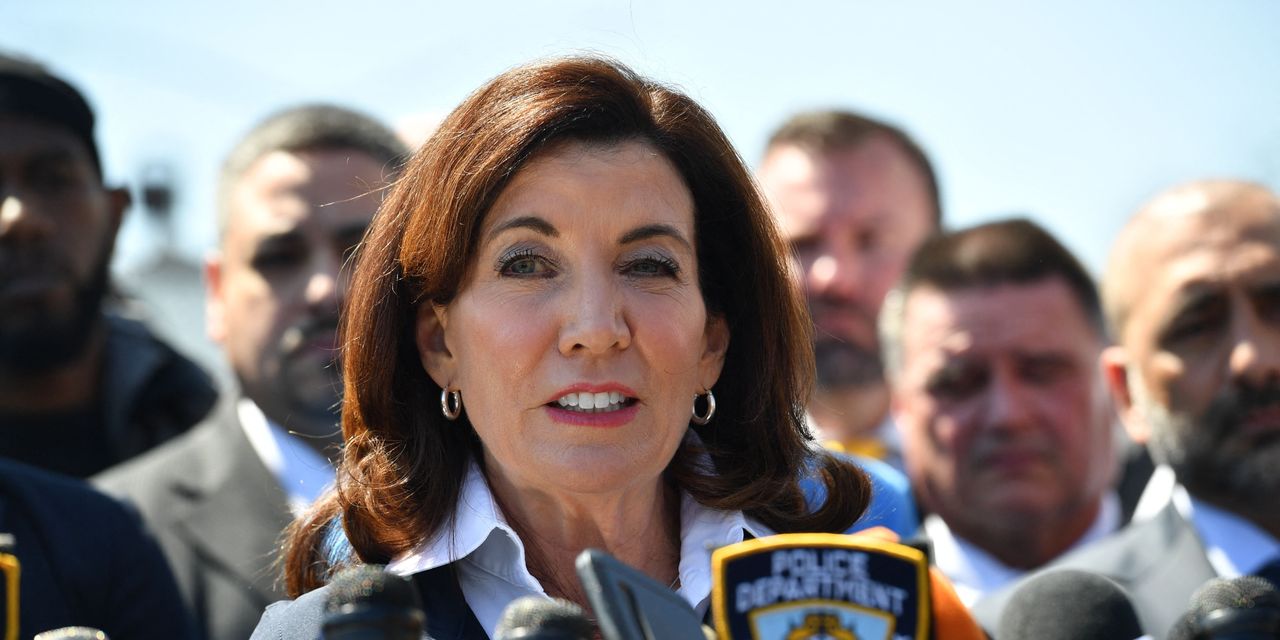 New York Gov. Kathy Hochul had strong words for the unidentified mass shooter, who is still at large, who left 16 subway commuters injured after opening fire at the Brooklyn 36th Street station during the Tuesday morning rush hour.

““This morning, ordinary New Yorkers woke up in anticipation of a relatively normal day … That sense of tranquility and normalness was disrupted — brutally disrupted — by an individual so cold-hearted and depraved of heart that they had no caring about the individuals that they assaulted as they simply went about their daily lives.” ”

“This individual is still on the loose. This person is dangerous,” she added. “This is an active shooter situation right now in the city of New York.”

The governor addressed the media, standing beside members of the New York Police Department and the New York City Fire Department, near the 36th Street subway station in Sunset Park, Brooklyn that became a mass shooting site just a couple of hours earlier.

The NYPD commissioner said that the investigation is ongoing, but described a terrifying scene that unfolded within a Manhattan-bound N train car just before 8:24 a.m. ET.

A man on that train, dressed in what appeared to be “a green construction-type vest” and a gray hooded sweatshirt, donned what appeared to be a gas mask before taking a canister out of his bag and opening it. As the train car began to fill with smoke, he opened fire, striking multiple people on the subway and on the platform at the 36th Street station.

The man remains at large, and it was not clear how he fled the scene. The suspect was described as a Black male, about five feet five inches tall, with a heavy build. The NYPD is asking for the public’s help, and for anyone with information, videos or photographs from the incident to report whatever they have to the Crime Stoppers tip line at 800-577-TIPS, or to tag the NYPD on Twitter at @NYPDTips.

The FDNY said that 16 patients are being treated; 10 are suffering from gunshot wounds, and five are in critical but stable condition at a local hospital. The other injuries include smoke inhalation and shrapnel, which could be a shrapnel from a bullet or something resulting from the panic that followed the incident.

Law enforcement officials said that there are currently no known explosive devices on NYC subway trains, and this is not being investigated as an act of terror.

Hochul said that she spoke with NYC Mayor Eric Adams, who tested positive for COVID-19 this week, whom she described as recovering but remaining actively engaged in the situation.

And Adams released a statement thanking all of the first responders. “You make New York the greatest city in the world, and I thank you for supporting your fellow New Yorkers,” he said.

He added that “We will not allow New Yorkers to be terrorized by even a single individual,” and also urged the public to come forward and aid in the ongoing investigation.

Hochul echoed those remarks, praised the resiliency of New Yorkers in helping each other, and calling for an end to the gun violence and “this surge of crime, this insanity that is seizing our city.”

“The people in the entire state of New York stand with the people of this city, this community, and we say, ‘No more,’” she said. “No more mass shootings. No more disrupting lives.  No more creating heartbreak for people just trying to live their lives as normal New Yorkers.”

She vowed to commit “the full resources of our state” to “stop the insanity of these crimes.”

“This is the day we pull together as New Yorkers, united in a common purpose to say, ‘No more.’”

Elon Musk called ESG a scam — did the Tesla chief do investors a...

Gold books sharpest daily drop in over 3 months, settles at...

The Margin: Monkeypox symptoms and how to tell if you have...