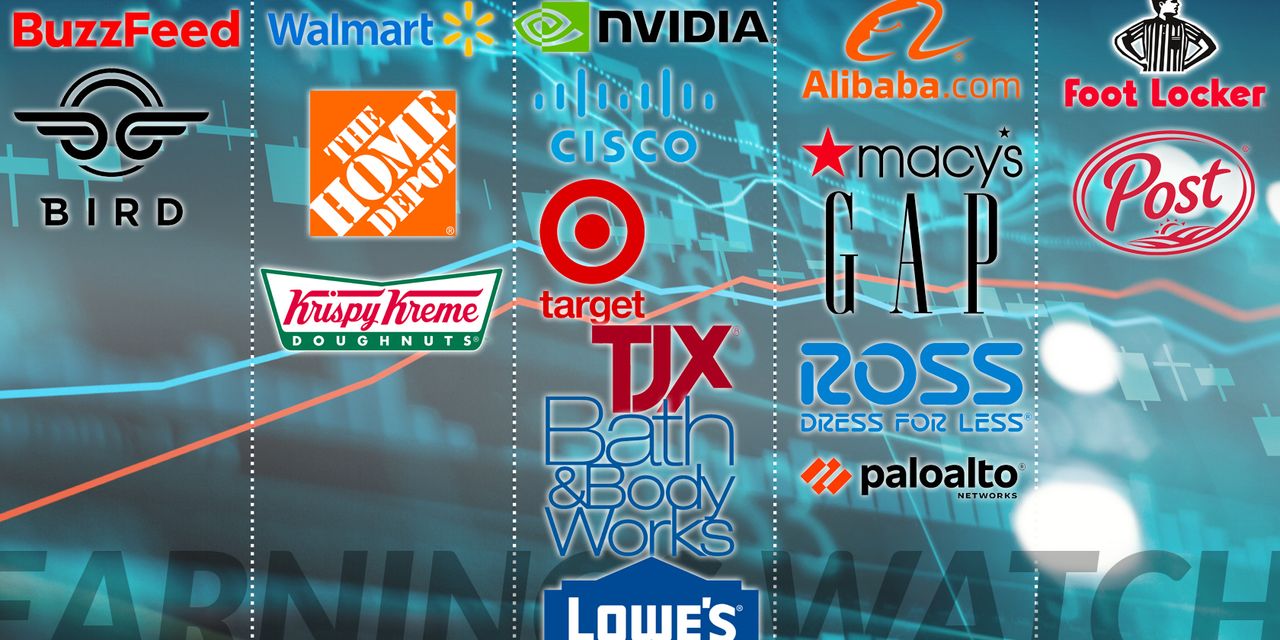 Even as price increases squeeze shoppers, analysts expect holiday-season sales to increase this year. With Walmart Inc., Target Corp. and discounters TJX Cos. and Ross Stores Inc. reporting results in the week ahead, we’ll hear straight from company executives whether analysts’ forecasts line up with their own.

Based on the mood this earnings season, odds are the news won’t be good.

Those retailers — along with tech names like Cisco Systems Inc. and Nvidia Corp. — will report after many companies in the S&P 500 put out disappointing fourth-quarter forecasts. Only 25 of those companies have released upbeat earnings-per-share forecasts for the fourth quarter, according to FactSet data, while 52 have issued gloomier forecasts.

“The lower earnings surprise percentage is due to a number of companies reporting actual earnings below estimates by unusually wide margins,” FactSet senior earnings analyst John Butters said in a report on Friday.

Beyond retail, chips and IT infrastructure, the media platform Buzzfeed Inc. BZFD, -5.08% reports third-quarter results on Monday after a wave of staff cutbacks, leadership changes and tremors in the digital-advertising market. Bird Global Inc. BRDS, +6.45%, the electric-scooter-rental service, also reports Monday after its own leadership shakeups and announcement of plans to expand into more U.S. cities.

Doughnut chain Krispy Kreme Inc. DNUT, +0.28% reports on Tuesday, and home-improvement retailers Home Depot Inc. HD, +1.04% and Lowe’s Cos. LOW, +2.30% report on Tuesday and Wednesday, respectively. Results from those two chains will offer a look at consumers’ appetites for home renovations as the housing market slows and more potential sellerskeep their homes off the market.

Thursday will bring more color to the state of online shopping in China, as Alibaba Group Holding BABA, +1.43% reports quarterly results amid ongoing COVID-19 restrictions in that country as well as competition from smaller rivals.

Post Holdings Inc., the company that makes Honey Bunches of Oats cereal and Bob Evans sausages, reports earnings on Friday. Executives for big snack-food and consumer-staples companies have said they have room to charge more if they want to. Investors will gain more insight into whether that trend extends to breakfast.

Nvidia, whose graphics cards and processors power PC games and crypto mining, faces a migration away from both. More people have ventured back to the outside world after a pandemic-era gaming boom, and the cryptocurrency market’s downward spiral continues. The company, as Barron’s noted, also faces curbs on chip sales to China and waning demand for PCs. Some analysts have had higher hopes for Nvidia’s larger data-center business, but investors have worried over slower cloud-services growth at Microsoft Corp. MSFT, +1.70% and Amazon.com Inc. AMZN, +4.31%.

“The decline in gaming chips should not come as too big of a surprise as people return to normal activities following the pandemic, spending less time playing video games,” Dan Morgan, senior portfolio manager at Synovus, said in a note on Thursday. “That trend [and] the decline in Ethereum mining have contributed to the slowdown in gaming GPUs.”

The U.S. has put restrictions on chips and AI technology that can be sold to China in an effort to curb advancements in China’s military. Applied Materials, a chip-equipment manufacturer that reports on Thursday, said a widened ban on sales of some technology to China could cost it up to $1.1 billion in sales over six months.

Cisco, meanwhile, faces questions about its ability to pivot from a router-and-switch mainstay to a company that draws sales from a wider variety of businesses, such as software subscriptions, security and hybrid work, Morgan said. The company could face questions about that transition’s effect on margins, and other analysts have said Cisco may have become too big to retain all of its market gains.

Retail fourth-quarter forecasts: Walmart WMT, +0.15%, Target TGT, +5.44% and other retailers report as they try to hack through overgrown inventories. Rising prices this year forced many shoppers to prioritize spending on food and other necessities, leaving TVs, clothing and electronics sitting in warehouses and raising the possibility of a holiday-season slump.

Retailers have been cutting prices to clear those goods and make room for items people want for the holidays, and analysts expect an abundance of discounts this fall and winter. But forecasts have called for holiday-sales growth nonetheless.

The National Retail Federation forecast holiday-season sales of between $942.6 billion and $960.4 billion, a potential record, helped in part by higher prices overall. Adobe on Thursday said rising prices hadn’t yet hurt holiday-season demand for goods sold online. But as bargains proliferate this year, some analysts say that customers could end up paying more in total for gifts than in prepandemic holiday seasons.

Walmart reports Tuesday, while Target reports Wednesday. Cowen analyst Oliver Chen noted that a dip in gas prices could free up consumer spending for both big-box retailers. But he suggested grocery sales would do the heavy lifting for margins.

On Wednesday, TJX TJX, -0.14% reports, and results from Ross Stores ROST, -0.99% are due Thursday. Some analysts have said that this year’s massive retailer inventory glut could be a boon for off-price retailers that buy up that inventory on the cheap.

Bath & Body Works Inc. BBWI, +4.56% also reports Wednesday, and athletic-gear chain Foot Locker FL, +3.00% closes out the week for the industry on Friday as it adapts to Nike Inc.’s NKE, +6.63% efforts to rely less on retailers for sales. But Nike recently said it expected rivals to keep cutting prices through at least the end of the calendar year.

“With retail inventory levels elevated and imports still strong (up ~37% vs. pre covid levels), our analysis indicates that sales and profit growth could be at risk over the next couple of years for a number of retailers,” Jefferies analysts said in August.

Crypto: Stablecoin Terra falls as low as 30 cents on the dollar

Stocks jump at the open of trading Tuesday