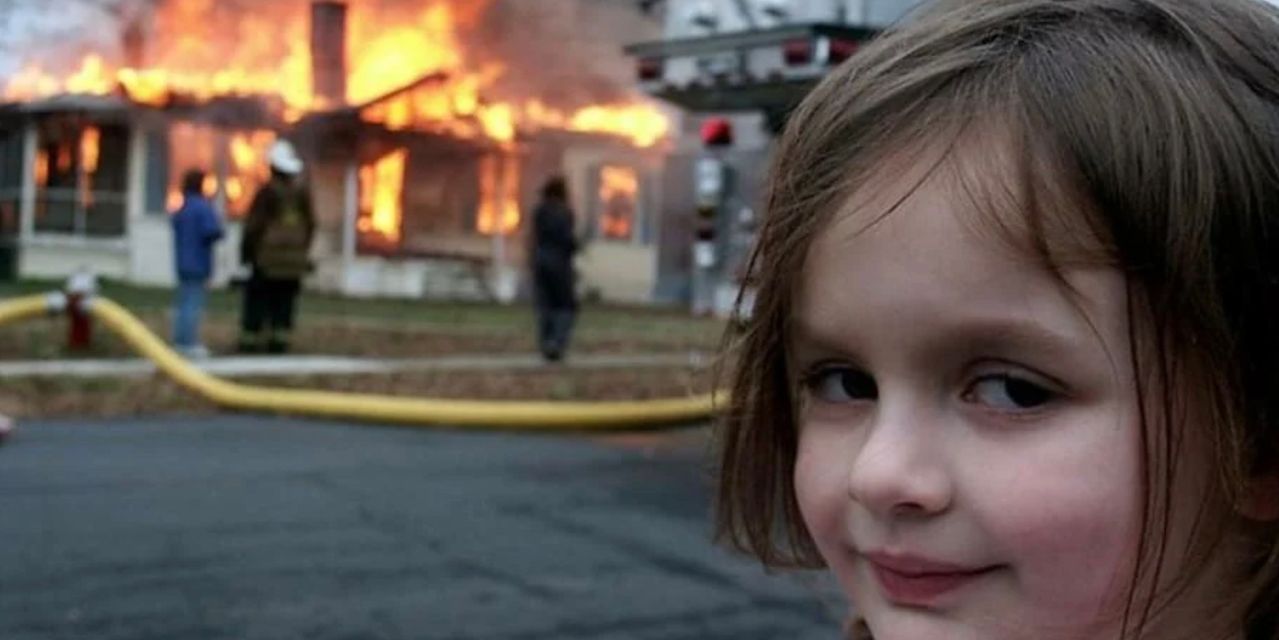 Now “Disaster Girl” really has something to smirk about.

The face of the beloved meme — which features a young girl smiling slyly into a camera as a house burns down behind her — has sold a non-fungible token (NFT) of her original image for almost half a million dollars.

Zoe Roth was four when her amateur photographer father took the iconic picture (which featured local firefighters putting out a planned, controlled fire) in January 2005 and entered it into JPG magazine’s “Emotion Capture” contest. The pic was also posted online on JPG’s website as part of the prize, where it has since entered internet infamy as one of social media’s most recurring memes.

But even though young Roth’s face became a Photoshop favorite, and her image was shared around the world, the family didn’t have a real means to monetize that — until now.

Roth, now 21, is a senior at the University of North Carolina-Chapel Hill. She told the Raleigh News & Observer that someone emailed her recently suggesting that she try to take control of her image by selling it as an NFT, with a potential profit of six figures. At first she thought, “There’s no way,” she told the paper.

But she and her dad did their research, including chatting with other viral meme subjects like “Overly Attached Girlfriend” Laina Morris and gawky school picture subject “Bad Luck Brian,” aka Kyle Craven. And they hired a lawyer and a manager to help them handle the logistics of uploading the file and “minting” the NFT. (A refresher: a non-fungible token is a certificate of ownership for a digital asset that is unique and are not meant to serve as a means of exchange.)

Related: What is an NFT? A Beeple NFT just sold on Christie’s for nearly $70 million, highlighting craze for cryptos

Read more: ‘What the hell’s an NFT?’ — ‘SNL’ explains in an amazing rap parody

Long story short, they listed the “Disaster Girl” token on April 16 for a 24-hour auction. Roth expected it to sell for 100 Ether, which is a cryptocurrency recorded on the blockchain Ethereum that equals about $2,200 per unit, on average. By the time the auction was over, a user named @3fmusic had purchased the token for 180 Ether — worth about $430,000 at the time, and valued at more than $470,000 as of presstime. (It should be noted that Ether’s value is volatile and can fluctuate by the minute.)

Roth and her dad didn’t just bank big bucks on the original sale of their token. By minting the NFT, they have also coded it so that anytime the NFT is bought, they receive 10% of the sale.

“Being able to sell it just shows us that we do have some sort of control, some sort of agency in the whole process,” said Roth.

Some other recent headline-making NFT transactions include Twitter CEO Jack Dorsey’s first tweet selling for $2.9 million; Kings of Leon releasing an NFT-only album for more than $2 million; and a 10-second digital collage that took 13 years to make selling for $69 million at auction.

And on Tuesday, the NBA’s Golden State Warriors became the first major professional sports team to sell its own non-fungible tokens.

Oil futures settle higher, but post of loss of more than 4% for the...

Economic Report: Demand for mortgages inches up amid slow season for home buying

: Google searches for Plan B pills surged as people fear...