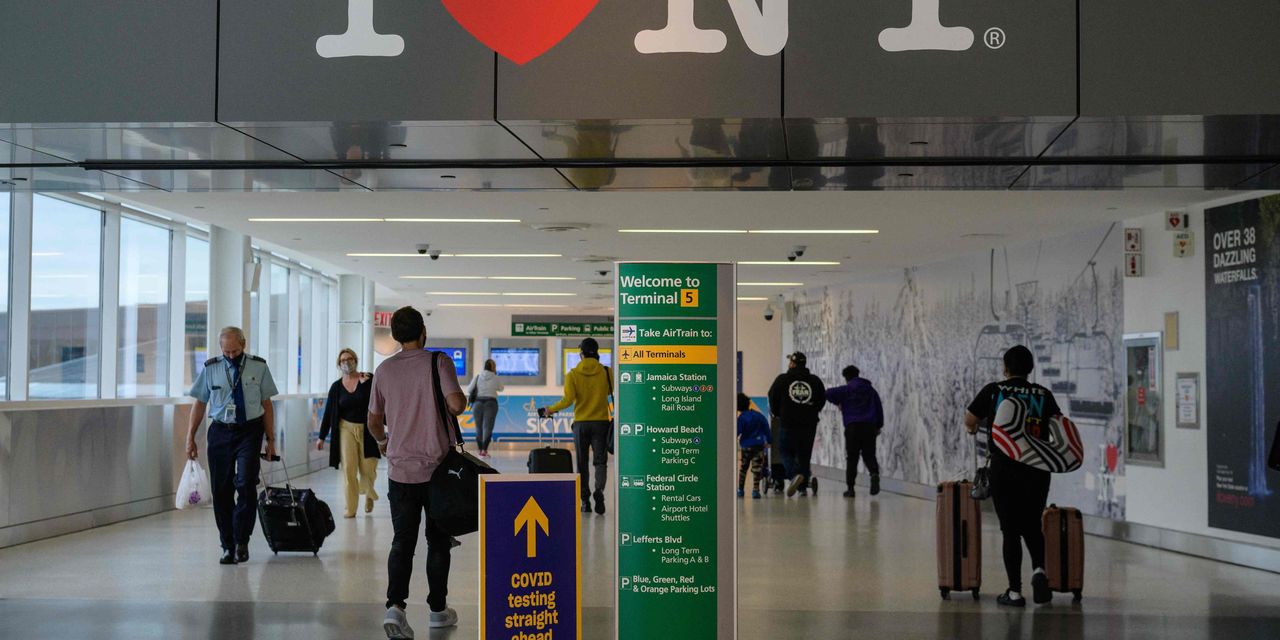 The global tally of confirmed cases of the coronavirus-borne illness COVID-19 topped 250 million on Monday, according to data aggregated by Johns Hopkins University, as the U.S. reopened to vaccinated travelers from 33 countries after 18 months of restrictions.

Travelers are required to show proof of vaccination and a recent negative coronavirus test to be allowed to enter. Most of the 33 countries are in Europe, which, amid still-rising cases, was described by the World Health Organization last week as the epicenter of the pandemic.

Cases are rising fastest in Central and Eastern Europe, where vaccine uptake has been especially low, including Russia which shut down business for a week to quell its high caseload. Russia and neighboring Ukraine set records for one-day cases numbers over the weekend.

The U.S. is still suffering about 1,200 COVID deaths a day, according to a New York Times tracker, although cases and hospitalizations are declining, outside of hot spots that include Colorado and California. But as most of those are in unvaccinated people, experts continue to urge that group to get their shots, with minimal impact.

The Centers for Disease Control and Prevention’s vaccine tracker is showing that almost 194 million Americans are fully vaccinated, equal to 58.4% of the overall population, a number that has barely budged in weeks and that is well below the 70% threshold experts say is needed to stop the spread.

White House Chief of Staff Ron Klain said Sunday that the administration of President Joe Biden is confident that his new vaccine mandate for private companies that employ more than 100 people will go through on Jan. 4, after a federal appeals court temporarily suspended it on Saturday.

“I’m quite confident that when this finally gets fully adjudicated, not just a temporary order, the validity of this requirement will be upheld,” Klain said on “Meet the Press” on Sunday.

Read now: ‘Too many people remain unvaccinated for us to get out of this pandemic’: Business groups give their verdict on employee vaccine mandate

In other news, a number of conservatives, including Sen. Ted Cruz, a Texan Republican, have criticized a tweet from the “Sesame Street” character Big Bird Saturday seeking to allay any fears among children getting their shots.

It later faced backlash from Cruz and others.

Health experts lamented the politicization of the pandemic, which has contributed to all too many preventable deaths.

In medical news, Regeneron Pharmaceuticals REGN, +1.84%  said four subcutaneous injections of its monoclonal antibody treatment — considered to be one dose — protected unvaccinated people from contracting COVID-19 by 81.6% for up to eight months.

“These results demonstrate that REGEN-COV has the potential to provide long-lasting immunity from SARS-CoV-2 infection, a result particularly important to those who do not respond to COVID-19 vaccines including people who are immunocompromised,” Dr. Myron Cohen, a physician in charge of the National Institutes of Health’s work on monoclonal antibodies, said in a news release.

Regeneron has already shared similar data in a study published in the New England Journal of Medicine, but this is a new analysis of that data, which came from a trial assessing the provision of the treatment to one household member if another was sick to see if it could prevent testing positive for the virus. The results came from 1,684 people who participated in the Phase 3, randomized, placebo-controlled trial.

Elsewhere, the Los Angeles vaccine mandate takes effect Monday, requiring proof of shots for everyone entering a wide variety of businesses from restaurants to shopping malls and theaters to nail and hair salons, the Associated Press reported.

Los Angeles is among a growing number of cities across the U.S., including San Francisco and New York City, requiring people to show proof of vaccination to enter various types of businesses and venues. But rules in the nation’s second most populous city, called SafePassLA, apply to more types of businesses and other indoor locations including museums and convention centers.

Germany set another record of 201.1 new cases per 100,000 residents in the past week, the AP reported separately. While it’s still a lower rate than in several other European countries, it has alarm bells ringing about what has been called a “pandemic of the unvaccinated.”

Northern Ireland Health Minister Robin Swann has sued Van Morrison, after the singer described him as “very dangerous” because of his handling of COVID restrictions, BBC News reported. Morrison is an outspoken critic of COVID restrictions and has called Swann a “fraud.”

The global tally for the coronavirus-borne illness climbed above 250 million on Monday, while the death toll edged above 5.05 million, according to data aggregated by Johns Hopkins University.

China, where the virus was first discovered late in 2019, has had 110,268 confirmed cases and 4,809 deaths, according to its official numbers, which are widely held to be massively understated.

The Margin: Half of all workers would rather take a pay cut than return...

: Soaring meat prices are leaving a bad taste in shoppers’...