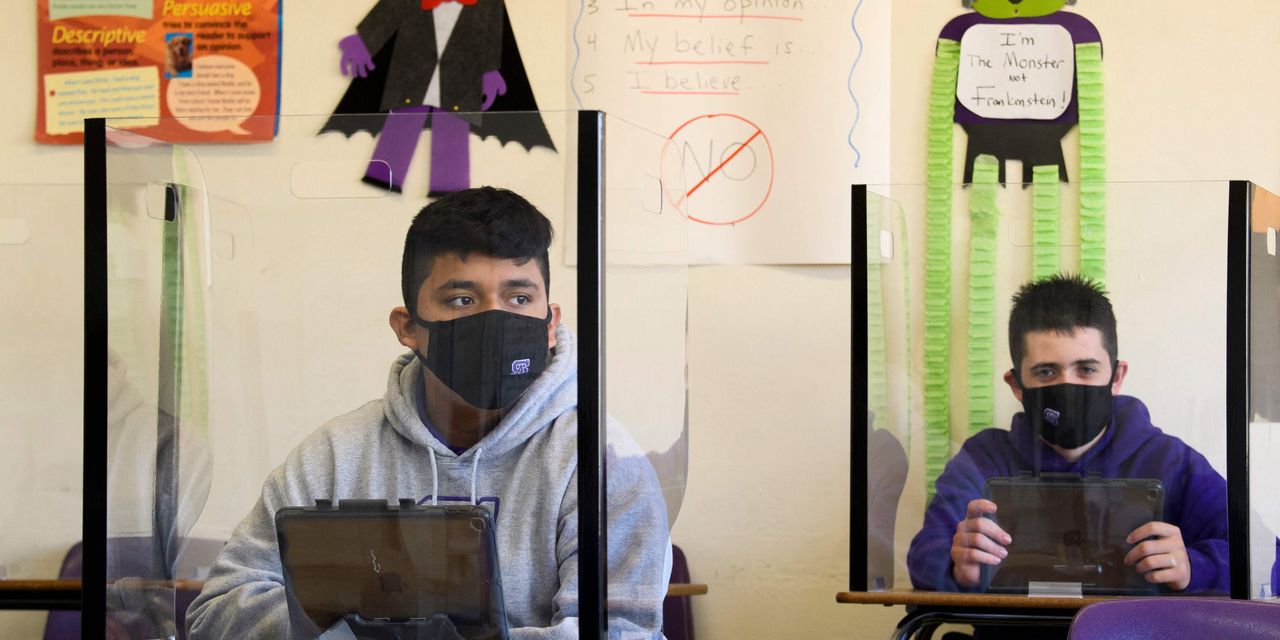 A growing number of public school districts across the U.S. are reinstating face-mask mandates, or considering doing so, as they seek to protect students from the wave of COVID cases being driven by the BA.5 omicron subvariant.

BA.5 is understood to be the most transmissible variant seen so far and to have an ability to break through vaccination and to cause reinfection.

School districts in Louisville, Atlanta and Los Angeles are either requiring masks or may yet do so, according to the Washington Post. That’s as data from the Centers for Disease Control and Prevention show a “high” community-level COVID, meaning high case and hospitalization rates, in hundreds of counties.

But other districts are opting to make masks optional, responding to pushback from parents and other groups organized around an opposition to masks. The CDC’s last statement on the issue was published in May and recommends universal indoor mask use when a community COVID level is high.

It remains unclear whether the CDC plans to issue more guidance for schools as they reopen for the fall term. A CDC spokeswoman told the Washington Post: “We are constantly evaluating our guidance and as new science based evidence emerges necessary updates are made.”

The daily average for new U.S. cases stood at 131,319 on Wednesday, according to a New York Times tracker, up 3% from two weeks ago. The true case count is likely higher, given the number of people who are testing at home, where the data are not being collected.

The daily average for hospitalizations rose to 43,341, up 10% in two weeks. The daily average for deaths is up 2% to 439. In California cases are higher than they’ve been in six months, while in New York there are more patients in hospitals than at the peak of last year’s delta wave.

Experts continue to clamor for vaccines that can prevent infection, and not just severe disease or death.

Pfizer, maker of both a vaccine and a COVID antiviral, posted earnings on Thursday, showing big second-quarter profit and revenue beats, driven primarily by “strong contributions” from Comirnaty, its vaccine developed with Germany’s BioNTech BNTX, +5.67% 22UA, +2.55%, and Paxlovid.

The company had $8.8 billion in revenue from the vaccine and $8.1 billion from the antiviral. Total revenue came to $27.7 billion, well ahead of the $25.7 billion FactSet consensus. Profit also beat expectations, coming in at $2.04 compared with a consensus of $1.72.

• President Joe Biden, who tested negative for COVID on Wednesday, is ending his isolation and urging Americans to get their vaccine shots and take advantage of treatments like Pfizer’s Paxlovid that helped him recover so fast. “You don’t need to be president to get these tools to be used for your defense,” he said in a Rose Garden speech, drawing a contrast between his experience with COVID infection and that of his Oval Office predecessor, who was hospitalized for several days. “In fact, the same booster shots, the same at-home test, the same treatment that I got is available to you.”

• A PBS documentary set to air next spring will examine the life and work of Dr. Anthony Fauci during the pandemic, the Associated Press reported. The film follows Fauci at home and at work during a 14-month period starting at the Biden inauguration in January 2021, PBS announced Wednesday. “Tony — A Year in the Life of Dr. Anthony Fauci” is set to debut on the the “American Masters” showcase, following a planned release in movie theaters.

From the archives (January 2021): A smiling Fauci calls reporting to Biden ‘liberating’ after ‘uncomfortable’ year with Trump

• The global fight against AIDS has suffered a setback during the COVID pandemic, according to a new report from UNAIDS, the United Nations agency. The report found that progress against HIV, the virus that causes AIDS, faltered during COVID as resources shrank, putting millions of lives at risk. The report has been released ahead of the International AIDS Conference in Montreal. “Globally the number of new infections dropped only 3.6% between 2020 and 2021, the smallest annual decline in new HIV infections since 2016,” the authors wrote. In Asia and the Pacific, HIV infections are rising, when they had been falling. About 1.5 million new HIV infections occurred last year, or a million more than targets.

• The Chinese metropolis of Wuhan has shut down a district of almost a million people after detecting four asymptomatic COVID cases, CNN reported. The city, the original epicenter of the pandemic, is following China’s stringent zero-COVID policy. Authorities in Wuhan’s Jiangxia district, home to more than 970,000 people, announced Wednesday that the main urban areas would enforce three days of “temporary control measures.” The new comes a day after new research found more evidence that the coronavirus pandemic originated in a wet market in Wuhan, and in a laboratory.

The global tally of confirmed cases of COVID-19 topped 574 million on Thursday, while the death toll rose above 6.39 million, according to data aggregated by Johns Hopkins University.

The Centers for Disease Control and Prevention’s tracker shows that 222.9 million people living in the U.S. are fully vaccinated, equal to 67.2% of the total population. But just 107.5 million have had a booster, equal to 48.2% of the vaccinated population, and just 19 million of the people 50 years old and over who are eligible for a second booster have had one, equal to 29.7% of those who had a first booster.

Capitol Report: All of President Biden’s key executive orders — in...