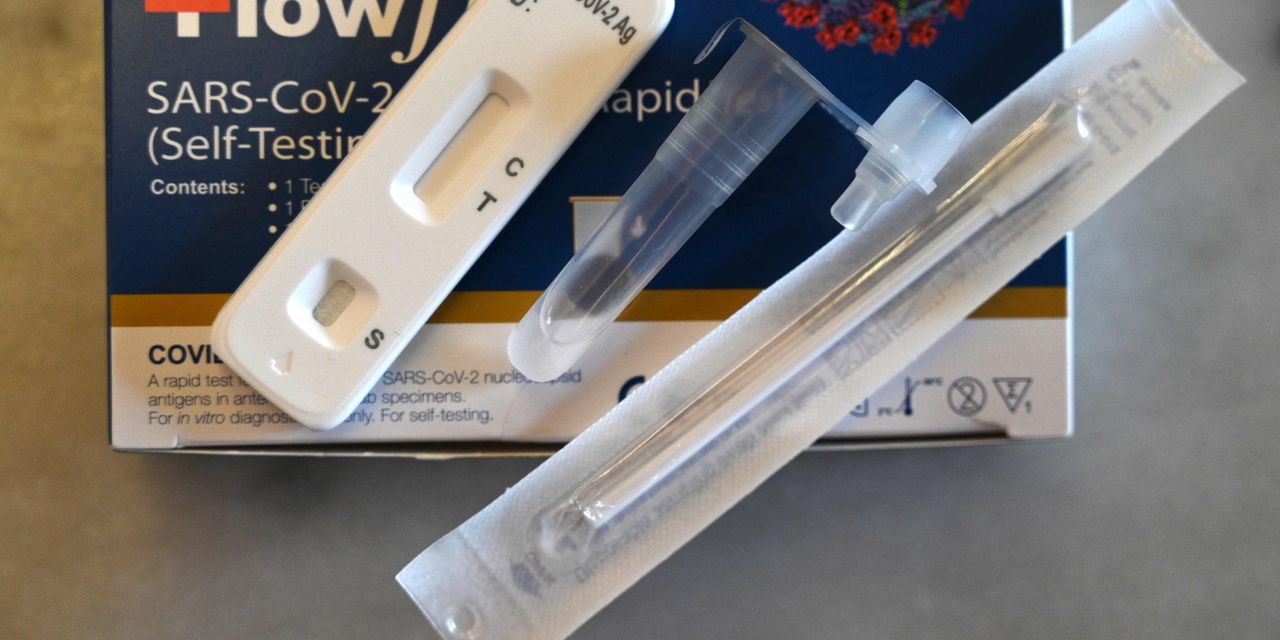 The performance of certain COVID-19 home-testing kits seems to have deteriorated after the omicron variant emerged, according to a new study published Thursday by the British Medical Journal.

“The researchers found that the sensitivities of the three tests performed with nasal self-sampling decreased during the emergence of omicron, from 87% to 81% for Flowflex, 80% to 73% for MPBio, and 83% to 70% for Clinitest,” the BMJ said in a statement.

The authors concluded that people with symptoms can rely on a positive rapid antigen test, but those with negative results should adhere to preventive measures because a false negative result cannot be ruled out.

“Given the less than ideal performance of antigen tests, updates to guidance in the public and private sector should take this into account when suggesting action based on test results,” said Timothy Feeney, research editor at the BMJ, and Charles Poole of the University of North Carolina in an editorial accompanying the study.

The WHO on Thursday released a response to the recommendations of The Lancet COVID-19 Commission’s report on lessons for the future from the pandemic, saying it generally aligned with the agency’s own commitment to stronger pandemic preparedness.

The commission endorsed the WHO’s central role in global health and agreed it should be supported with an increased budget. It also highlighted how the pandemic exposed challenges such as chronic underfinancing of the UN, rigid intellectual property regimes, a lack of sustainable financing for low- and middle-income countries, and “excessive nationalism,” which drove vaccine inequity.

But the WHO pushed back against the report for failing to convey what it called the “full arc” of its response to the crisis from the moment in December of 2019 when it received the first alerts of cases of pneumonia of unknown cause in Wuhan, China.

The WHO has been criticized for moving too slowly in declaring a pandemic and in warning about the human transmissibility of the virus.

The commission also said the WHO was too slow both to support travel bans to prevent the spread of the virus and to endorse the use of face masks in public spaces.

“A comprehensive and detailed list of actions taken by WHO during the COVID-19 response can be viewed in our interactive timeline,” the agency said in a statement.

The Lancet commission reserved much of its ire for governments for allowing disinformation to spread across social media, which discouraged many people from getting vaccinated once vaccines were available.

“Too many governments have failed to adhere to basic norms of institutional rationality and transparency, too many people — often influenced by misinformation — have disrespected and protested against basic public health precautions, and the world’s major powers have failed to collaborate to control the pandemic,” the authors wrote.

The news comes as U.S. known cases of COVID are continuing to ease and now stand at their lowest level since early May, although the true tally is likely higher given how many people are testing at home, where the data are not being collected.

• In the first two years of the pandemic, the number of people in the U.S. working from home tripled, home values rose and the percentage of people who spent more than a third of their income on rent also rose, according to a survey from the U.S. Census Bureau, the Associated Press reported. The survey also found that the share of unmarried couples living together increased, Americans became better connected to the Internet, and the number of people identifying as multiracial grew significantly.

• The CEO of Amsterdam’s Schiphol Airport has quit after a summer that descended into chaos and flight cancellations amid staff shortages in the aftermath of the COVID pandemic, the AP reported separately. “I’ve done my very best, but we’re not there yet. I do hope it gets better soon,” CEO Dick Benschop said in a statement released by the airport Thursday, after he told the board of his decision on Wednesday night. He said he was stepping down “to give Schiphol the space to make a new start. I do not want attention on me to become an obstacle for Schiphol.”

• The Chinese city of Chengdu will lift a full COVID lockdown in all districts still facing strict curbs as a recent outbreak comes under control, Reuters reported local authorities as saying. The news will come as a relief to the roughly 21 million people who have been locked down since Sept. 1 and who also suffered through an earthquake during that time. Chengdu reported 29 new locally transmitted COVID infections on Wednesday, down from 35 a day earlier, according to city government data on Thursday.

• Kentucky Gov. Andy Beshear and first lady Britainy Beshear got COVID boosters in public on Wednesday, in an effort to encourage others to do the same, the AP reported. The Democratic governor urged Kentuckians to get vaccinated and boosted against the coronavirus, and he called on leaders in government and other sectors to encourage people to get the shots.

The global tally of confirmed cases of COVID-19 topped 610.5 million on Wednesday, while the death toll rose above 6.52 million, according to data aggregated by Johns Hopkins University.

The Centers for Disease Control and Prevention’s tracker shows that 224.4 million people living in the U.S. are fully vaccinated, equal to 67.6% of the total population. Just 108.9 million have had a booster, equal to 48.6% of the vaccinated population, and 22.2 million of those 50 and over who are eligible for a second booster have had one, equal to 34.3% of those who had a first booster.

: ‘Peak inflation is not here yet’: Rents continue to rise, putting pressure on...

Dispatches from a Pandemic: Elon Musk vs. the Great Resistance. CEOs...

: GameStop’s latest big day picks up steam after hours with...