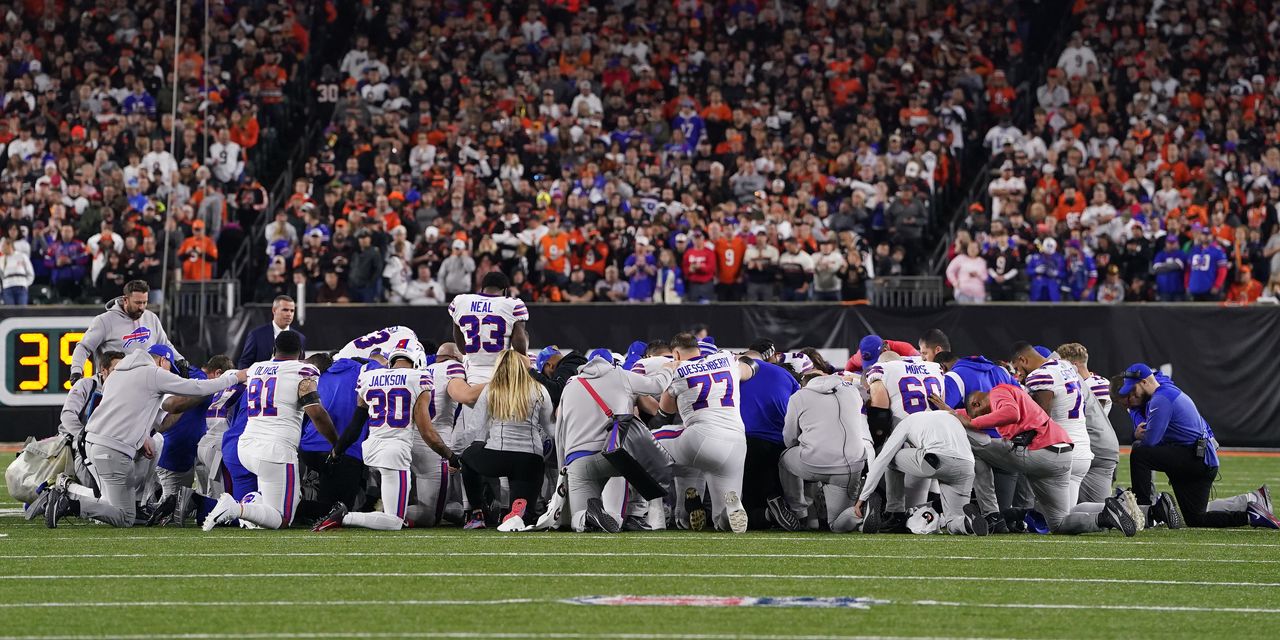 Monday night’s NFL game between the Buffalo Bills and Cincinnati Bengals was suspended after Bills safety Damar Hamlin collapsed on the field and was taken away by ambulance, in a scene that left players in tears and fans stunned.

Hamlin, 24, was involved in a tackle, stood up, then collapsed with 5:58 remaining in the first quarter, laying motionless on the field. Medics gave him CPR as he lay on the field for about 16 minutes, and ESPN reported he was given oxygen as he was strapped to a backboard and transferred to the ambulance. The NFL later said he was listed in critical condition at a local hospital.

Players from both teams gathered around Hamlin as medics worked on him, some in tears, others kneeling in prayer. Fans in Cincinnati fell silent.

Both teams were sent to their locker rooms to regroup, and after roughly a half-hour wait — and a little over an hour since the injury occurred — the NFL said the game would not resume Monday. It was unclear when the game would be rescheduled.

Hamlin was taken to the University of Cincinnati Medical Center, a Level 1 trauma center. ESPN reported that Hamlin’s family was with him at the hospital.

Visibly shaken ESPN announcers attempted to fill airtime. Many, including studio commentator Booger McFarland, said the game should be canceled. “Nobody is concerned about football right now. America is concerned about one thing: The health and safety of this young man,” McFarland said.

“This went from a sports story to a news story, from a sporting event to a matter of life and death, like THAT,” ESPN announcer Joe Buck said.

The game had been set up as one of the most anticipated of the NFL season, with two of the league’s best teams fighting for playoff positions.

The scene was reminiscent of a frightening incident in June 2021, when Denmark’s Christian Eriksen collapsed and went into cardiac arrest during the Euro 2020 soccer tournament. Eriksen survived and returned to the playing field in 2022.

: Oil prices settle higher, supported in part by third-quarter growth in the U.S....

: The number of baby boomers and Generation X who plan...