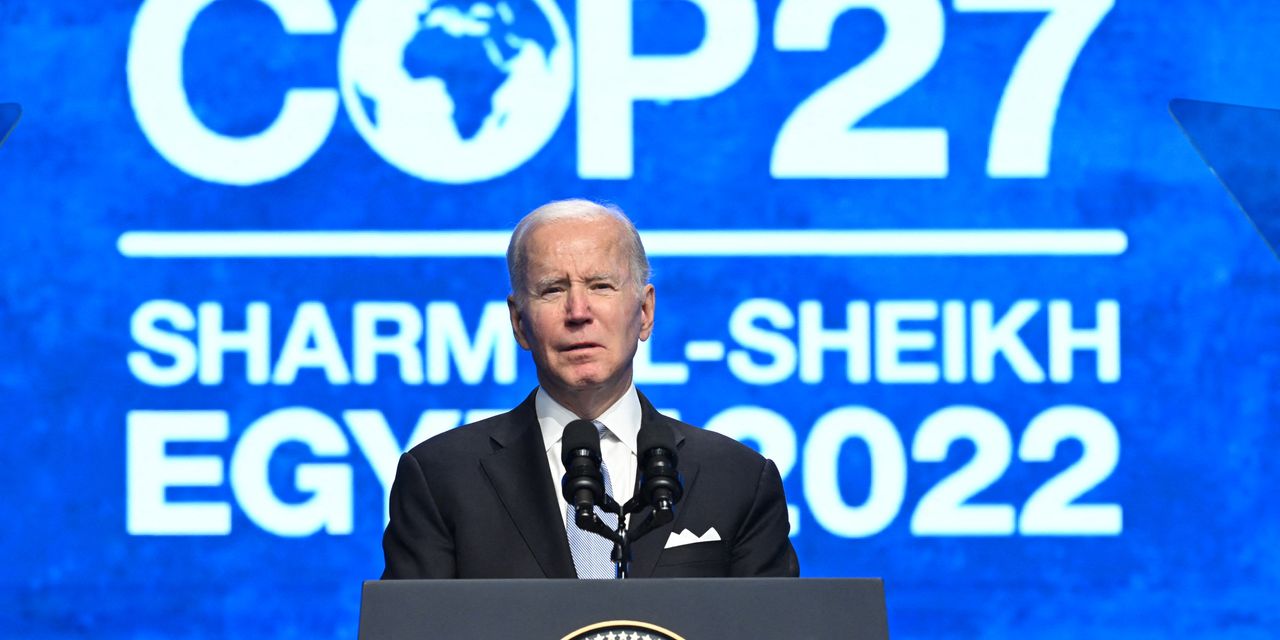 President Joe Biden addressed the U.N. climate summit Friday with his Democratic party having survived a projected Republican “red wave” in the midterm elections — and in doing so protecting at least the bulk of a landmark climate-change spending law he signed this year.

Biden addressed the U.N.’s Conference of the Parties (COP27) climate summit in Egypt on his way to Bali, Indonesia, for the Group of 20 meeting and a planned sit-down with China’s Xi Jinping.

In August, Biden signed the largest U.S. investment in fighting climate change ever, the Inflation Reduction Act (IRA). That puts him on stronger footing on the global stage than at last year’s COP26 gathering in Scotland, when American commitments to carbon reduction weren’t backed by law.

Four themes color Biden’s trip: Russia’s war in Ukraine, escalating trade and security tensions with China, the potential for a global recession in the coming months and the existential problem of climate change.

“The climate crisis is about human security, economic security, environmental security, national security and the very life of the planet,” Biden said in his address to the summit.

Biden apologized to the group for the U.S. pulling out of the Paris Climate Accord — and its global-warming limit of 1.5 degrees Celsius (equivalent to 2.7 degrees Fahrenheit) — which the country did briefly under President Donald Trump. In a remark that garnered speech-pausing applause from the audience, Biden said the U.S. commitment to the global effort, struck in Paris in 2015 and reaffirmed each year, is apparent in the climate-focused IRA.

Biden also highlighted a proposal that would require large federal contractors to develop carbon-reduction targets and disclose their greenhouse gas emissions, by which the administration hopes to use the federal government’s purchasing power to slow the impacts on climate from the private sector and bolster vulnerable supply chains.

“As the world’s largest customer, with more than $650 billion in spending last year, the United States government is putting our money where our mouth is to strengthen accountability for climate risk and resilience,” he said.

Biden’s other task is to convince the summit participants of the U.S. commitment to engage with China, not only on trade and security matters, but also as part of an alliance between the world’s two top polluters to deliver on their carbon-reduction plans and show measurable progress. The U.S. has said it can reach net-zero emissions by 2050; China’s target date is 2060. Both countries have said they can show progress as soon as 2030, but some observers say time may be running out to hit that marker.

At the start of the COP27 summit, U.N. chief Antonio Guterres called for a historic agreement — or “climate solidarity pact” — between developed and emerging economies. The flagship climate conference runs Nov. 6-18.

The U.S. and China, the world’s two largest economies and top greenhouse-gas emitters, “have a particular responsibility to join efforts to make this pact a reality,” Guterres said earlier this week.

Biden used Democrats’ better-than-projected midterm-election results as an opportunity to reassure the world that the U.S. is committed to doing its part to address threats to the planet as a whole, including climate change.

“If the United States tomorrow were to, quote, withdraw from the world, a lot of things would change around the world. A whole lot would change,” Biden said in remarks at a press conference on Nov. 9, the day after the election.

The IRA’s $375 billion commitment to climate efforts, including manufacturing and purchasing incentives for electric vehicles GM, +4.08% F, +2.79%, tax breaks for home solar and a boost to manufacturers who green up their operations, will provide Biden with leverage as he works to convince other countries to strengthen their own efforts to reduce greenhouse-gas emissions.

Current and former Biden climate officials told the Associated Press that the IRA was crafted in a way that will make it difficult for a future Republican Congress or president to reverse it. That’s in part because of the law’s tax incentives, which are the sort of low-tax strategies normally favored by Republicans, and because much of the advancing green technology would bring jobs to strongly Republican states.

Also read: Some 75% of surveyed Americans would jump at a ‘green’ job in solar, wind or EVs, which tend to pay 21% more

Republicans won’t have a veto-proof majority in the new Congress, even if the GOP ends up with an advantage of a few seats. And even if a Republican wins the White House in 2024, the tax credits will be in place and will already be spurring industry, said Samantha Gross, head of climate and energy studies at the centrist Brookings Institution.

“It’s a lot of tax credits and goodies that make it hard to repeal,” Gross said.

At the climate negotiations in Egypt, Biden’s special climate envoy, John Kerry, said, “Most of what we’re doing cannot be changed by anyone else who comes to Washington, because most of what we do is in the private sector. The marketplace has made its decision to do what we need to do.”

Still, it won’t be all smooth sailing for Biden. Republicans, who as of Friday were close to clinching a modest advantage in the House (control of the Senate will likely hinge on a runoff election in Georgia), have said they will work to repeal parts of the law and advance their own climate and energy bill. They have accused Biden of contributing to rising energy prices by blocking more drilling of U.S. fossil fuels CL00, +1.90%. Those fossil fuels are the major contributor to climate change.

While Biden may be moving slower than Republicans would like when it comes to permitting, he has in fact called for more oil drilling to help calm energy markets during the Russia-Ukraine crisis and has even chastised profitable oil companies for not releasing more product. It’s a narrow line for the president to walk and in doing so, he has raised the ire of some environmental groups.

Still, Biden argues there is scope for both near-term emergency energy policies and a long-term commitment to the transition from oil and gas.

“Russia’s war only enhances the urgency of the need to transition the world off its dependence on fossil fuels,” Biden said Friday. “[N]o action can be taken without a nation understanding that it can’t use energy as a weapon and hold the global economy hostage.”

Outside the U.S., there are also concerns that rising energy costs and a looming recession could dampen resolve to transition to cleaner energy. Germany has dipped back into heavy-polluting coal markets to ensure it has enough power for the cold winter ahead.

Efforts are under way at the COP27 summit to keep attention on methane, a more intense but shorter-lasting greenhouse gas than carbon emissions.

On Friday, the Biden administration detailed what it calls a “super-emitter response program” that would require oil and natural-gas NG00, -6.25% operators to respond to credible third-party reports of high-volume methane leaks.

The EPA estimates that in 2030, the proposal would reduce methane from covered fossil-fuel sources by 87% from 2005 levels.

The U.S. government also released a new draft report this year about how climate change is affecting America. The report determined that over the past 50 years, the U.S. has warmed 68% faster than the planet as a whole.

Since 1970, the continental U.S. has experienced 2.5 degrees Fahrenheit of warming, well above the average for the planet, according to a draft of the National Climate Assessment, which is the U.S. government’s definitive report on the effects of climate change and represents a range of federal agencies.

The effects of human-caused climate change on the United States “are already far-reaching and worsening,” the draft report says, but every added amount of warming that can be avoided or delayed will reduce harmful effects.

Intel coverage resumed at JPMorgan with an underweight rating

The Moneyist: My daughter died from a drug overdose, and two of her kids...

: Ryan Cohen cashed out of Bed Bath & Beyond stock with more than...

Shares of Boeing Co. BA, +4.02% surged 3.5% toward a more than seven-month high in midday trading, reversing an earlier loss of as much...

Investors should buy Zillow Group Inc. now, UBS says, even if they have to wait a year before the U.S. housing market starts improving....