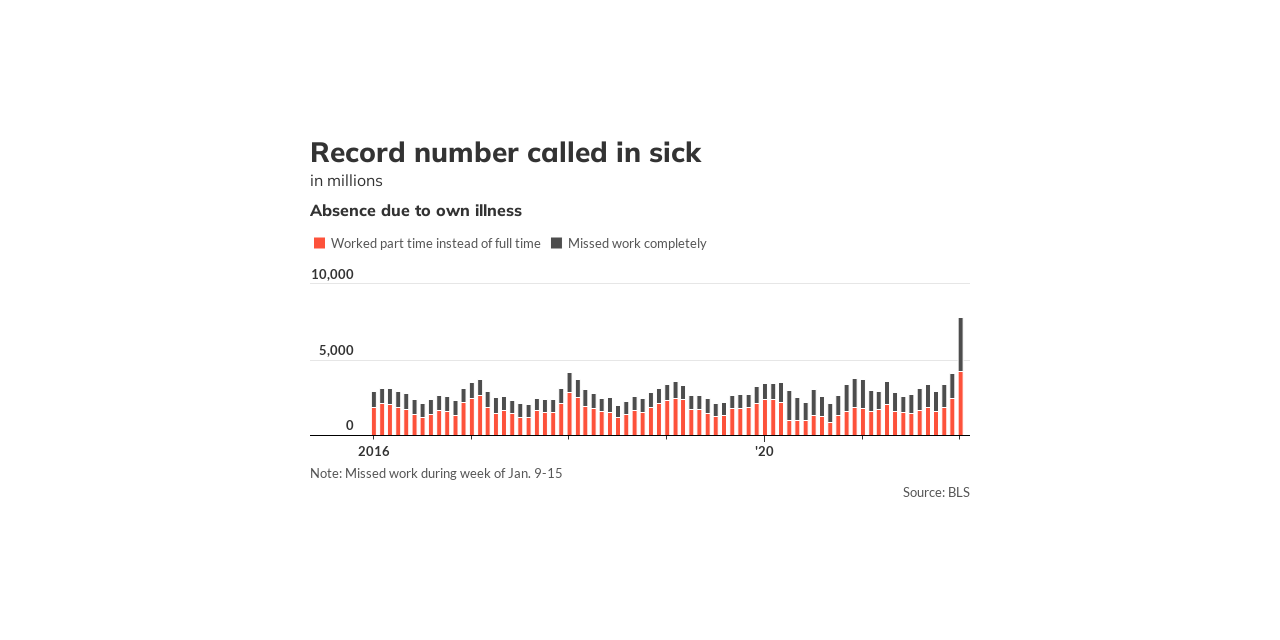 A record 7.8 million people called in sick to work in January as cases of COVID-19 spiked around the nation, the Bureau of Labor Statistics reported Friday. The data cover the week of Jan. 9 to 15, when the BLS surveys individuals and businesses to collect data for the monthly employment report.

The previous record was set in January 2000 when 5.1 million missed some work during the survey week.

The data, which come from the survey of households, are not seasonally adjusted.

The government doesn’t know how many people called in sick during the other weeks in January. According to the New York Times tracker, COVID cases peaked at a daily average of more than 800,000 near the end of the survey week.

About 3.6 million full-time workers missed the entire week of work due to illness, the most since the government began tracking the data in 1976. An additional 4.2 million full-time employees worked fewer than 35 hours because of illness. That’s also a record high.

Most of those who called in sick should have been counted as employed in the household survey released Friday. That survey, which determines the unemployment rate, reported that employment rose by a seasonally adjusted 1.2 million.

The separate survey of businesses, which reports on the number of nonfarm payrolls, treats sick leave differently. Anyone who was paid for even one hour of work would be counted as employed, and anyone who got paid while on sick leave would too. The BLS has estimated that about 78% of civilian workers have access to some paid leave for illness.

Still, that leaves several hundred thousand jobs that might have been unreported in the nonfarm payrolls numbers (because the worker was not paid for sick leave.) That makes the January seasonally adjusted job growth of 467,000 even more impressive. Ahead of the report, some economists were predicting a decline in nonfarm payrolls because of workers calling in sick and because of businesses temporarily closed due to COVID.

The government doesn’t track how many part-time workers missed shifts due to illness, but we do know that 2.3 million people who usually work part time missed the entire week for any reason, including illness, vacations, bad weather, and family obligations.

GE stock’s bull-market bounce takes it toward the longest win streak in more than...